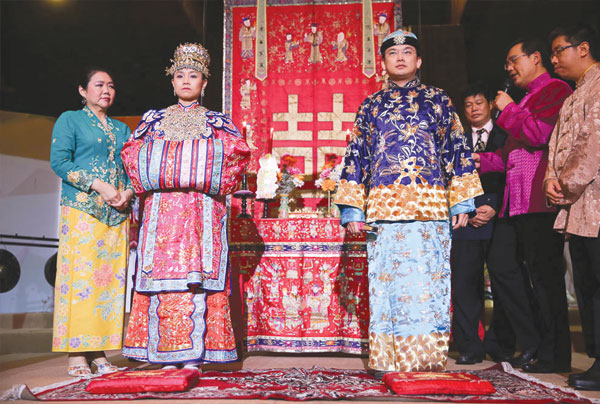 The wedding ceremony of the Peranakan is largely based on Chinese tradition, and is one of the most colourful wedding ceremonies in Malaysia and Singapore. The traditional Peranakan wedding is a 12-day affair which is usually carried out in the bride's house, where ceremonies like the Lap Chai (exchange of gifts) and Cheo Thau (coming of age) are carried out.

The Cheo Thau ceremony is one of the most important ceremonies and marks the first occasion when the bride and bridegroom will wear their authentic wedding robes. The actual wedding ceremony will only take place before noon that day, after the Cheo Thau ceremony. This ceremony is one of great fanfare where the bridegroom heads a procession of serunai (a musical instrument), musicians, men carrying umbrellas, and lanterns. The whole troop will then proceed to the bride's residence after a series of rituals at his home.


Next, follows the Chim Pang ceremony which marks the first meeting between the couple where the bride would lead the groom into the bridal chamber where he would unveil her. Together they would be served tea and a bowl of kueh ee – small white and red dumplings in a sweet broth.

The third ceremony takes place in the bridal chamber. This is called Chia Sia. This ceremony is amusing and unique because friends and guests of the bridegroom would gather in the room and tease the bride with the hope of inducing laughter from the bride. And if the bride does indeed break out into uncontrollable fits of laughter, the unfortunate groom would have to treat all the guests to dinner. 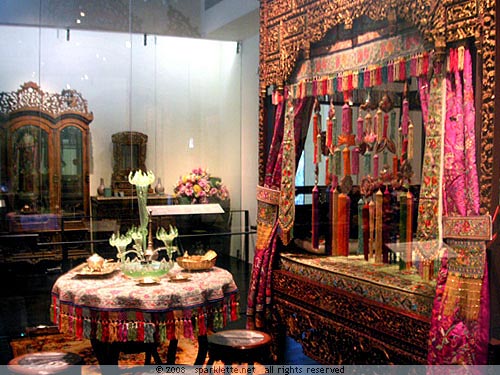 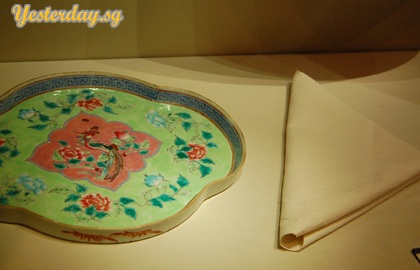 A pair of rooster and hen would also be released under the bridal bed. If the rooster emerged first, the family could expect a male first-born, and a baby girl if the hen took the lead.

A Pak Chindek, and a Sang Kek Um (the wedding masters and mistresses respectively) are most often required for the elaborate Peranakan Wedding Ceremony, because the traditions become so complex that the weddings need to be orchestrated by wedding specialists.